First and foremost, of course, is caffeine (see figure), whose stimulating effect on the 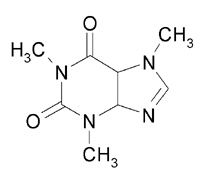 Structural formula caffeine central nervous system is the primary reason for the consumption of tea and coffee. Often the caffeine from tea is also called teaine (also known as theine), which is used to differentiate it from the caffeine in the coffee beans. Chemically speaking, caffeine and teaine are of course identical. Caffeine belongs to the methylxanthines, is easily soluble in water, colourless and odourless. The commercial green and black tea contains more caffeine than roasted coffee -  3 - 5% of the dry matter of the tea and 1 - 1.5% of the coffee beans. Nevertheless a cup of coffee contains 4 to 8 times more caffeine than a cup of green tea. The reason is simply that much more coffee powder is used for one cup of coffee as tea leaves for a cup of tea. If the tea were as strong (in terms of caffeine content) as coffee, the Flavonoids (also known as polypheonols or tanning agents) contained in tea leaves would make the tea is inedible bitter.
Caffeine content in various beverages

The pharmacology of caffeine

After an oral intake (tea, coffee, cola, energy drinks), caffeine becomes quickly and completely absorbed in the gastrointestinal tract. After 15 - 45 minutes the caffeine level in the blood reaches its maximum. The half-life in the blood is about 5 hours, but is significantly longer in pregnant women and children.
The stimulating effect of caffeine is mainly due to its interaction with the surface receptors of the nerve cells in the cerebrum. 100 - 200 mg Caffeine (2 - 4 cups of tea) have a significant effect on psychological Basic functions such as drive and mood. Motor skills are increased (e.g. faster typewriting with a lower error rate), which accelerates the mental pace, the reaction time is shortened, the mood is raised, the learning process is made easier. However, the effects are dependent on habituation. They occur with strong Tea or coffee drinkers have a much weaker reaction than occasional drinkers. As with many other substances, the performance-enhancing effects of caffeine often lead to abuse (e.g. by athletes), which is why caffeine is on the doping list.
Another effect of caffeine, which is also used therapeutically, is pain relief. For example, caffeine is one of the three active ingredients in the painkiller Thomapyrin (the other two are aspirin and paracetamol). Too much caffeine intake in turn leads to headaches.
The common belief that caffeine has a diuretic effect has now been refuted. The consumption of tea or coffee does not lead to more urination than drinking the same amount of water.
Side effects and toxicity of caffeine are very low. The fatal dose for humans is over 200 mg / kilogram body weight.

The flavonoids make up about 20 - 30% of the dry matter of the tea leaves. The main representatives of this group are 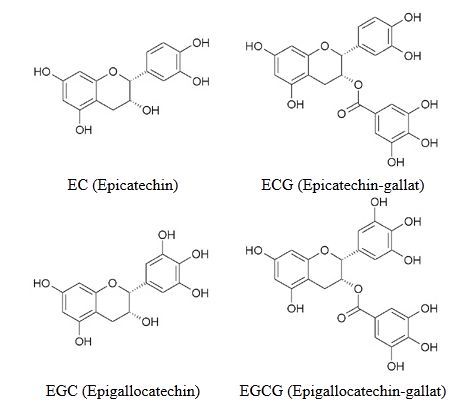 which make up about 70% of the flavonoids. Most of the health benefits of tea can be attributed to these catechins. Erroneously, flavonoids in tea are often also called tannins. However, tannins are toxic, high-molecular compounds that are mainly found in tree bark and protect the trees against attacks by herbivores.
During the production of black tea the catechins are oxidised (fermentation). This first produces 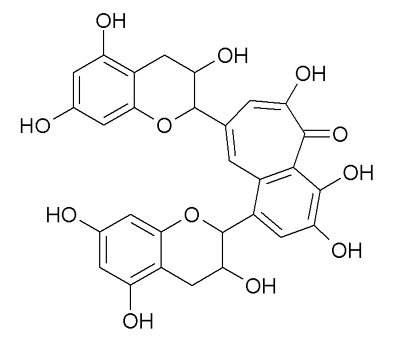 (yellow), which then polymerise to form thearubigins, the red colouring typical of black tea. As a result, most of the antioxidant effect of the flavonoids is lost. In terms of taste, the flavonoids belong to the bitter makers of tea. Furthermore, the composition of the flavonoids has an important influence on the colour of the tea infusion.

The pharmacology of catechins

Among the catechins, EGCG (egg gallocatechin gallate) not only predominates in terms of quantity (up to 70% of the total catechin content), but EGCG also appears to be the substance that gives the tea its cancer preventive properties. EGCG has been shown in the laboratory to have a wide range of effects on tumour cells (more about this in "Tea and health").
Catechins are also said to have a number of other effects, such as lowering cholesterol levels, lowering blood sugar, antibacterial action etc (more about this in "Tea and health").

On the market of natural preparations there are capsules containing green tea extracts. The ingredients of these capsules are not much different from those in a tea infusion, only in a very concentrated shape: The catechin content in one capsule is usually equivalent to 2 - 3 cups of green tea. Caution: Although catechins are the main carriers of the health-promoting effects of green tea, they are also toxic in high concentrations. There have already been reports of isolated cases of poisoning with green tea extract capsules in Spain and France. Care should therefore be taken when taking these capsules.

Structural formula theanine
They make up about 1 - 4% of the dry matter of the tea leaves and are essential for the fresh and pleasant taste of the tea. The majority of the amino acid content of the tea leaves (more than 50% in high-quality green teas) is accounted for by a special amino acid, L-theanine, a derivative of glutamine. Theanine is found exclusively in the tea plant and counteracts the caffeine in tea:  Unlike caffeine, theanine calms the central nervous system. Moreover, theanine, together with the other amino acids, has a sweetish taste and weakens the bitter taste of catechins. Because of its positive influence on taste, many efforts are made by tea manufacturers to increase the content of amino acids in tea, especially in green teas.
The pharmacological effect of theanine has not yet been very well studied. Most publications on theanine are based on animal experiments. According to them, theanine: 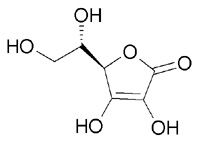 Structural formula ascorbic acid
Tea leaves contain a number of vitamins, but the amount of most vitamins is so low that you would have to drink a huge amount of tea to cover your daily needs.
The exception is vitamin C (ascorbic acid). In high quality green teas the vitamin C content can reach up to 0.5% of dry matter. One litre of green tea thus covers more than 50% of the daily requirement of vitamin C. Due to its production process, black tea contains far less vitamin C than green tea and the content of other vitamins is also lower in black tea than in green tea.

Of practical importance is above all the fluorine contained in tea. The content of water-soluble fluorine in tea leaves is highly significant. One cup of tea covers 10 - 15% of the daily fluorine requirement to protect against caries.
< >
Compare Products
Compare
Clear All
You have no items to compare.