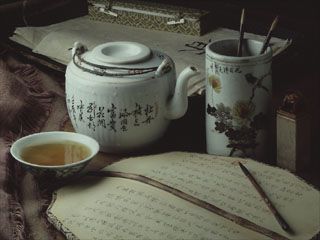 Tea composition That an optimal preparation of tea does not end with the choice of tea and water and the determination of the amount of tea and the infusion time will be noticed at the latest when choosing the suitable vessel for infusion. The fact that it is not easy to make the right choice in this respect is shown by the fact that Lu Yu dedicated an entire chapter to this subject in his famous book on tea. Even though drinking habits have changed a lot since then, the Chinese still know a variety of ways to brew tea. In principle, however, tea is also brewed in China in a pot, a cup or a glass.

Pouring and serving tea in a teapot has a rather short history in China compared to drinking tea. The use of the teapot began in the 14th - 15th century, when more and more loose teas were drunk. Unlike pressed tea, which had to be ground into powder and boiled, loose leaf tea was poured into a teapot with hot water. Today, pouring tea in a teapot is the most widespread way of preparing tea in China, with the porcelain or clay teapot being preferred, depending on the region.

In southern China, teapots are mainly used, which are produced in the Yixing region, about 180 km west of

. The Yixing teapots are not pottery in the traditional sense. The raw material for these teapots is the clay from the Yixing region, which is characterised by its excellent malleability, which is why the Yixing teapots exist in an almost infinite number of designs (a larger collection of beautiful Yixing teapots has been compiled by Matthias Claus, which can be admired on his homepage, www.das-klassische-china.de). Because of the high content of iron, this clay usually has a red to brown colour. Ochre-coloured or olive-green clay is rarer. Compared to traditional pottery, Yixing teapots are fired at much higher temperatures (between 1100 and 1200°C). The result is a higher hardness and, despite the absence of a glaze, a lower capacity to absorb water. This Yixing pot and cup are part of a service together with 3 other cups. The special feature of this jug is the movable dragon's head which is worked into the lid. The jug is named "Yu Hua Long" (fish turns into dragons), which is derived from the lore that tells of a fish that had to jump a difficult hurdle to turn into a dragon.
A special feature of Yixing teapots is their outer surface. The surface of a new teapot feels rough and looks matt. But the longer the teapot is in use, the smoother and shinier the surface becomes. This change is caused by the daily touch of the teapot with the hand and strengthens the bond between the teapot and the user immensely, which is why a Chinese is very reluctant to part with his favourite teapot.
The popularity of Yixing teapots in southern China is also due to the fact that people there drink mainly oolong. Since oolong uses a comparatively large quantity of tea and several infusions are drunk quickly one after the other, a smaller teapot is more advantageous. The Yixing teapots with a capacity of up to 500 ml are ideal for this.
Another reason for the great popularity of the Yixing teapots is their almost unlimited design possibilities, which made the Yixing teapots famous in the first place. It all began in the early 16th century by the young servant of a scholar. Gong Chun, as the boy was called, is considered to be the first to incorporate forms from nature into the design of the teapots. All known master tea-teapot makers after him followed his example.
A few beautiful specimens: 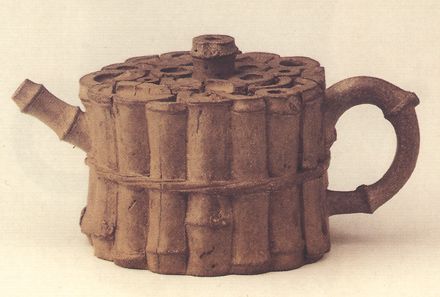 This jug looks like a bunch of bamboo sticks. In this 17th century masterpiece, everything has been reproduced so faithfully that it is almost impossible to distinguish it from real bamboo sticks.

Again a jug in the shape of a bamboo stem. Late 18th, early 19th century. 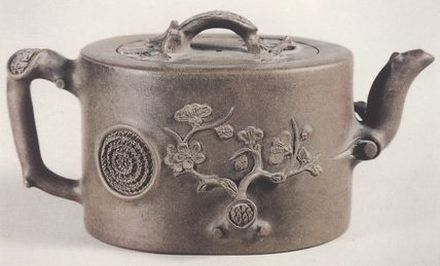 A jug with the decoration in the shape of decorative quince flowers. Late 18th, early 19th century.
A disadvantage of the Yixing teapots, for many Chinese rather an advantage, is their ability to enrich the tea's aromatic substances in the fine pores of the clay material. As a result, a true tea lover will have a separate Yixing teapot for each type of tea to avoid mixing the flavours of different tea varieties. According to legend, a good teapot could accumulate so much tea aroma in the clay material that after years of use, all you need to do is pour hot water into the teapot to get a full-bodied tea.

Porcelain tea accessories have a much longer tradition in China than the Yixing teapots. Already in the Tang period (618 - 907) porcelain vessels were used for boiling water, as Lu Yu described in his book about tea. Also the bowls for drinking tea (see below) were made of porcelain. 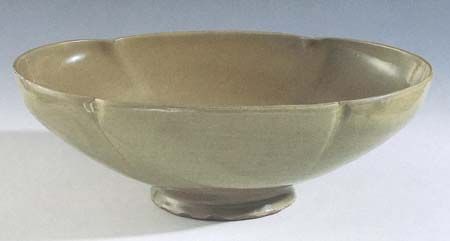 A celadon porcelain bowl from the Tang Dynasty. The bowl has the shape of a wooden apple blossom. The light green tint of the glaze was highly praised by Lu Yu, because it brings out the colour of the tea infusion best.
It is hardly surprising that Lu Yu has just praised porcelain goods for drinking tea, given their widespread use in everyday life. In the Tang period, normal pottery was practically of no importance for everyday use. The advantage of porcelain over pottery is its glazed surface, which guarantees neutrality of taste and smell.
Although the so-called blue and white porcelain from China is particularly famous in Europe, it plays only a minor role in teapots. Among antique collectors you will find mainly teapots, mostly from the late Qing period (19th century - 1911) and the Republic period (1911 - 1949), with coloured paintings on a white (actually colourless) glaze (overglaze painting).

Blue and white is the term used to describe porcelain goods that bear a blue painting under the glaze: a porcelain blank is painted with a material containing cobalt and then sprayed with the glaze material. After firing, the glaze material becomes transparent and reveals the underlying painting, which becomes blue due to the cobalt, for viewing. As the blue painting is against a white background (the material for the blank is white), hence the name blue-white. The production of blue and white porcelain began in the Tang Dynasty. The production technique was only mature in the Ming Dynasty.
A few beautiful specimens: A rare hexagonal jug from the late 19th century. 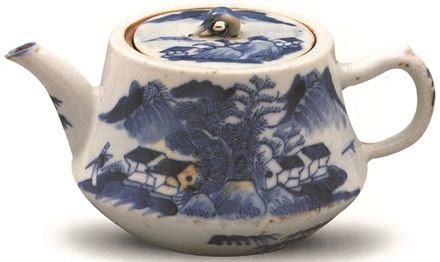 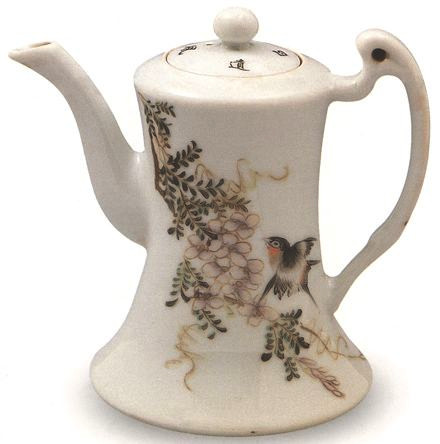 In northern China, the so-called lidded cups made of porcelain are very common. They consist of a saucer, a cup and a lid. Lidded cups are mostly used for pouring flavoured teas, more rarely green Tea or oolongs. The tea leaves are put directly into the cup and infused with hot water. For drinking, the lid is moved just enough to leave a small gap: the tea leaves are thus all retained in the cup. More modern designs of lidded cups do not have saucers and are much more common today. 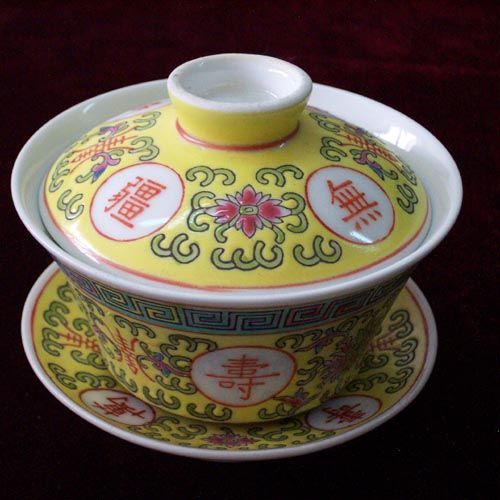 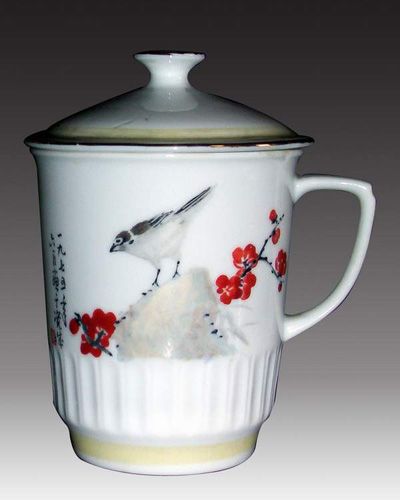 In southern China, but especially in the coastal provinces of 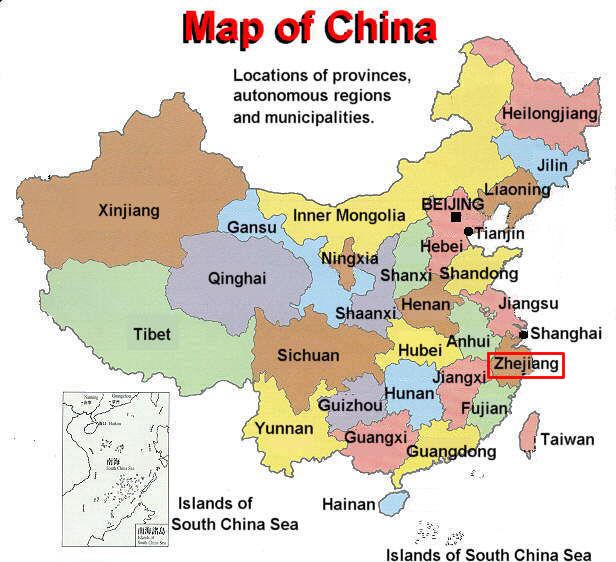 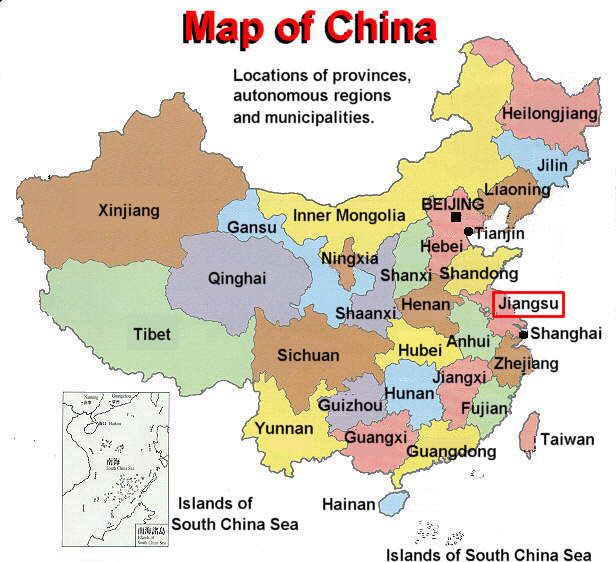 , where mainly high-quality green teas are drunk, a glass is often used for infusion. The leaves are put into the glass and infused with hot water. The glass has the advantage that you can watch the tea leaves rise directly (see the series of pictures below). The glass is especially recommended when pouring green tea specialities (called art tea) from the Huang Shan region (the Yellow Mountain), as the rising of the bound tea ball and the release of the flowers hidden in it can be observed most beautifully in a glass.
Photo series: Infusion of a green tea (Lung Ching, Lion Peak, first spring picking) in a glass.
< >
Compare Products
Compare
Clear All
You have no items to compare.