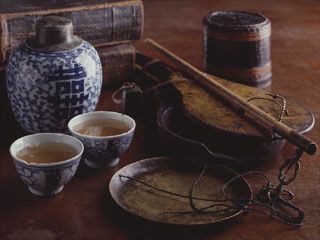 Tea composition In contrast to black tea, which is more forgiving if infused for too long, green tea can quickly turn bitter. While a good Darjeeling can be steeped for 5 minutes without becoming noticeably bitter, a green tea should usually not be steeped for more than 3 minutes. As a general rule of thumb, the higher the quality of a tea, the more you can take and the longer you can steep it. The reason: the high quality teas from China always consist of very fine buds and very young leaves from spring plucking. The ratio of amino acids to catechins, which is crucial for the taste of the tea, is very favourable, so it does not become bitter very quickly. Teas of inferior quality, in Germany these are usually teas under 15 Euro / 100g, mostly consist of older, broken leaves and often even contain small branches or long leaf stems. The catechin content is comparatively higher than in good teas. They become bitter very quickly.

Note: High quality teas are also very expensive in China, despite the huge difference in living standards compared to Germany. The first spring pickings from a well-known growing region can easily reach a price of 20 to 40 Euro / 100g. If you add the costs of transport and the profit margins for exporter, importer, wholesaler and shop owner (usually the same tea in a German tea shop costs about 3 to 4 times as much as in China), such treasures would be so expensive in Germany that nobody would be willing to pay for them. In order to keep the prices for green tea reasonably affordable, unfortunately, usually only teas of inferior quality are imported.
Another rule is: the hotter the water, the shorter the drawing time. This is because as the temperature rises, the speed at which the ingredients are released from the tea leaves also increases. Furthermore, the solubility of the ingredients increases with temperature.
Ultimately, however, it is above all personal taste that determines the quantity and brewing time of a tea. Therefore, you should take the trouble to infuse a tea in different ways and try out for yourself which combination tastes best. The information on the package should therefore be understood more as a guide.

The often quoted rule that "a 2-minute tea is stimulating, a 5-minute tea is calming" is certainly one of the most popular misconceptions. The reasoning that catechins, which dissolve only after prolonged infusion, should bind caffeine in the intestines and delay its absorption cannot be scientifically proven. A more recent study from 2001 even shows that tea infusions have a multiple excess of caffeine in terms of the ratio of caffeine to catechins. Although the relative surplus of caffeine decreases with increasing infusion time, the absolute surplus of caffeine increases. The increasing amounts of catechins with the increasing infusion time can therefore not neutralize the excess caffeine. Since caffeine enters the bloodstream very quickly and efficiently, there is actually no reason to believe that tea has a different effect than coffee. The reason why coffee seems to stimulate faster is simply that a cup of ready-to-drink tea contains far less caffeine than a cup of coffee (see ingredients).

The interplay between tea quantity and infusion time in flavour development

Those who like to experiment can also try a "cold infusion": The tea must be steeped with cold water in a closed container in the refrigerator overnight. The "cold infusion" has the effect that considerably less catechins are dissolved from the leaves because they are hardly soluble in cold water. Amino acids and caffeine are released more slowly than with a hot infusion, but after a night in the fridge the "cold infusion" still has enough ingredients to provide a pleasant taste. The "cold infusion" is particularly recommended for a hot summer afternoon.

The preparation of an oolong is different from the preparation of all other teas and requires special utensils, the most important being a small Yixing clay pot. The pot is filled up to the half with tea leaves. The tea is infused with boiling hot water. The first infusion should only last about 1 minute, further infusions should each last 15 - 30 seconds longer than the infusion before. This keeps the strength of the infusions relatively constant. With a very good Oolong you can infuse the same tea up to 7 times.

White tea is only very lightly fermented. The processing of the tea leaves to white tea essentially involves only drying in the sun. The cells in the tea leaves are hardly damaged. Therefore, the ingredients can only be dissolved very slowly. This is especially important with the Yin Zhen (silver needle). You should let the Yin Zhen steep in hot water for about 10 minutes, otherwise the infusion will taste almost nothing. In Germany Yin Zhen is famous for its mild taste. Could it be that the infusion is pulled too short?

Tea bags usually consist of broken or mechanically crushed tea leaves. The crushing process increases the surface area of the tea leaves. The release of the ingredients takes place much faster than with loose leaves and the tea therefore becomes bitter much faster, which is why tea bags should only be steeped as briefly as possible.
< >
Compare Products
Compare
Clear All
You have no items to compare.