< >
The tea needs very good water to develop its aroma and taste. In classical Chinese literature there are at least as many essays on water for making tea as on tea itself. Among tea lovers, there was even a list of springs whose water was particularly suitable for making tea. 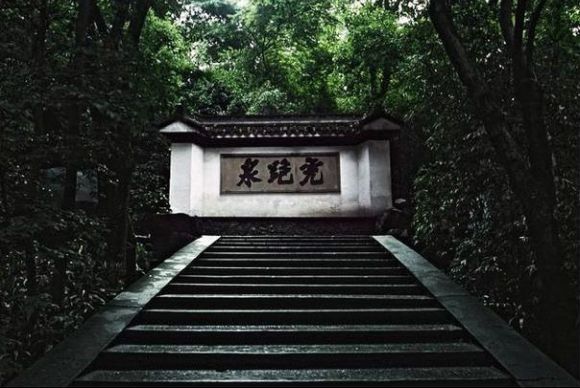 The Hui Shan source in the city of Wu Xi is considered in various Chinese "Top 10"-lists as the second best source in all of China, which is why it is called "the 2nd source under the sky" (these are the signs on the wall) 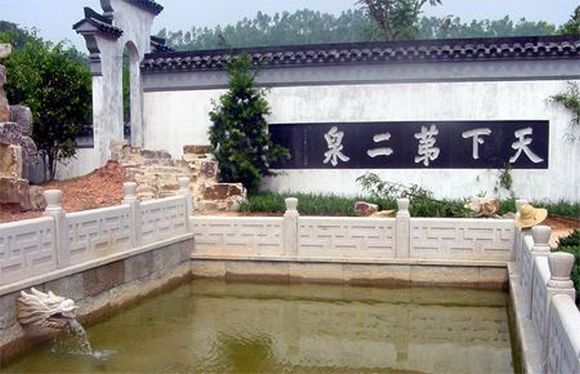 The Hu Pao spring in the city of Hang Zhou is very famous for its delicious water, which is particularly suitable for Lung Ching tea.
What properties must the water have in order to be suitable for making tea? According to popular opinion, you should always use soft water for green tea. Hard water, i.e. water with a high content of calcium and magnesium, is not suitable for green tea. It is often said that the high calcium content leads to a dark infusion and the formation of a thin, not very appetizing film on the surface of the tea. Well, this is only half the truth.

The fact is that the calcium and magnesium ions alone do not affect the colour of the infusion. The film floating on the tea surface has nothing to do with calcium or magnesium ions either!!!!
Note on hard water: According to the German industrial standard, water hardness is defined by the quantity of alkaline earth ions dissolved in water, i.e. magnesium, calcium, strontium and barium ions. Only the first two are important for drinking water, the last two are practically not present in drinking water. One German hardness grade (1°d or 1°dH) corresponds to a concentration of 0.18 mmol/l for the calcium ion, i.e. 10 mg calcium oxide (CaO, quicklime) or 7 mg calcium ions in 1 litre of water. Water with a degree of hardness below 7 is considered soft, which corresponds to about 50 mg calcium per litre of water.

Take a commercial vinegar essence (25% acetic acid, colourless, neutral in taste) and add about 0.8 ml of it to one litre of tap water of hardness range III (14° to 21°dH or 100 - 150 mg/L calcium). The amount given here is only a guide value, to find out the right amount you have to experiment a little. The following applies: the pH value should be between 5 and 7 after the addition of vinegar essence. Untreated tap water is used for comparison. Both are used to make a green tea, preferably in a glass, as this is the easiest way to compare the colour of the infusion. Chemically speaking, this treatment only changes the pH value, but not the content of dissolved calcium (or commonly called lime).
The result: First of all, it should be pointed out that the tea does not taste at all sour with the treated water. On the contrary, it tastes better than the one with the untreated water, which tastes more bitter and leaves a furry feeling on the tongue. The infusion with the treated water is much lighter than the infusion with the untreated water. Even the thin film does not appear with the treated water. 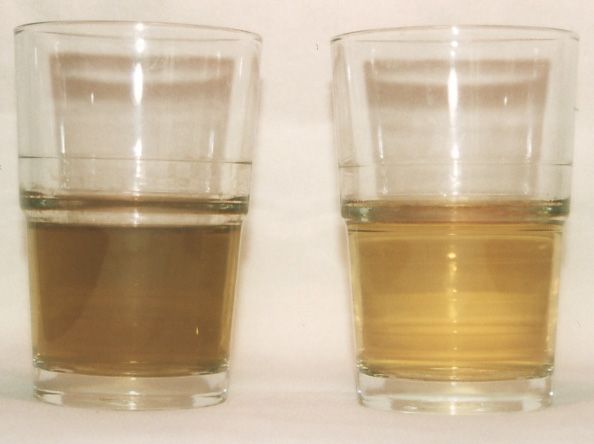 On the left: A tea prepared with untreated tap water (hardness range III).
Right: The water was treated with vinegar.

Warning: This experiment should not encourage anyone to treat drinking water with vinegar to make green tea. It is only intended to illustrate that water hardness alone has no effect on the enjoyment of tea.
Note on pH value: The pH value indicates on a scale from 0 to 14 how acidic an aqueous solution is. Values above 7 indicate an alkaline (or basic) solution and values below 7 an acidic solution. Note that the pH scale is a logarithmic scale, i.e. if the pH value falls by 1 on the pH scale, the acid strength is already 10 times stronger.

From the same mineral water producer, take a carbonated and a non-carbonated variety. The only difference between the two types is the carbon dioxide content, but not the mineral content. In my case: Auqa Römer, 590 mg/litre calcium (corresponds to a water hardness of !!80°dH!!) and 190 mg/litre hydrogen carbonate. The pH-values can be determined with a pH-paper. As expected the carbonic acid variety has a lower pH-value. Make a green tea with the two varieties as in the experiment 1.
The result: The same differences as in test 1 can be seen: The carbonated variety (lower pH and therefore more acidic) makes a lighter cup and does not form a disturbing film on the tea surface.

The pH value of the water is therefore responsible for both phenomena, the dark cup and the unappetizing film on the tea. The reason:

pH value and colour of the tea infusion
The colouring agents contained in the tea leaves (catechins, chlorophyll, flavonoids) are pH indicators, i.e. they react in colour to the change in pH of the water. At low pH values (below 7) the tea infusion is lighter than at high pH values. If the pH value falls below 4, the tea infusion becomes almost colourless.
pH value and the oxidation of the catechins
When the water becomes neutral (pH = 7) or even alkaline (pH > 7), the polyphenols tend to oxidise spontaneously. Through oxidation, the polyphenols cross-link with each other to form water-insoluble polymers, which then form a thin film on the water surface.

What does water hardness have to do with the pH value?

Natural, soft water usually has a pH value of less than 7, because natural water is a carbonic acid solution that is created by absorbing carbon dioxide from the air. Although carbonic acid is a very weak acid, it is sufficient to bring the pH value of the water below 7. Hard water, on the other hand, usually has a pH value above 7, so it is slightly alkaline. Hard water is produced by dissolving the lime rock in carbonated water. When dissolved in water, the carbonate ion (lime = calcium carbonate) traps the carbonic acid and thus increases the pH value. When choosing water for making tea, you should therefore pay more attention to the acid/base property of the water than to the calcium content. However, the calcium content is often a more or less good indicator of the acid/base property of water. You should also pay attention to the hydrogen carbonate content .
In the following, the various waters are assessed with regard to their suitability for making tea:

In many German municipalities, especially in southern Germany, the water is very hard. The responsible waterworks will provide information on drinking water quality on request. The pH value of the drinking water is also given. According to regulations, the pH value of the water may be between 6.5 and 9.5. In most cases, however, it is between 7.5 and 8.5. Without treatment, it cannot be used for making tea. The most practical method for treating tap water is a water softener. 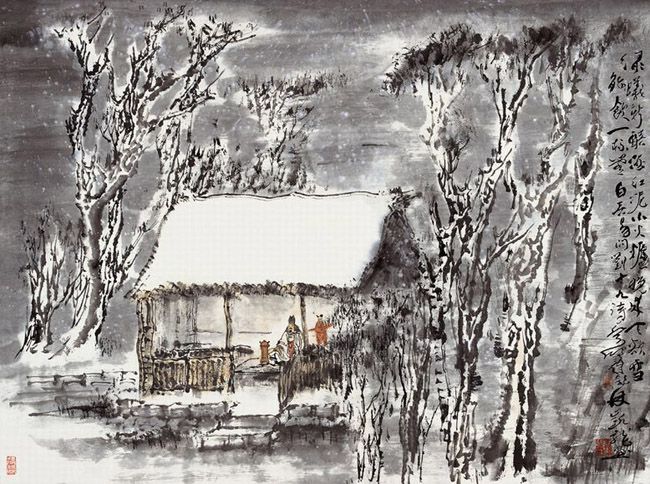 Ink painting with the inscription "Tea tasting under the snow"

Rain and snow are actually excellent for making tea because they represent pure water. In Chinese literature, making tea with melted snow is one of the most romantic scenes. Today, nobody would dare to use rain or snow water for drinking or making tea, just think of acid rain.

There is still the spring water, if it is advertised as drinking water. As the pH-value and the lime content varies greatly from source to source, you should always make a small test to see if the water is suitable for making tea.

A tip on water

The water should never be boiled for a long time. If it boils for a longer period of time, the carbon dioxide dissolved in the water will escape completely. As a result, the water loses the ability to maintain the pH value in a weakly acidic range. This has negative consequences for the taste of the tea.
< >
Compare Products
Compare
Clear All
You have no items to compare.