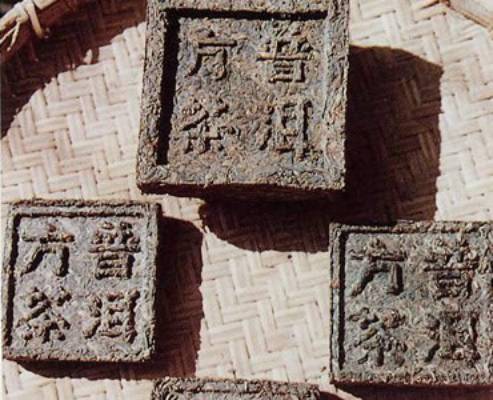 , the quality of a tea is primarily determined by two factors: The freshness and the picking season.
The dry appearance of the tea may give the impression of a long shelf life. But the fact is that tea, especially green tea, suffers greatly from the effects of moisture, light, heat and oxygen. The environmental influences lead to the following changes:
A tea that has been stored for a long time therefore has a dark colour, gives a dark and cloudy infusion, has no fragrance and tastes of nothing. When buying tea Therefore, always ask for teas from the latest harvest. Straight with more expensive green tea varieties, one must expect that because of the high prices should be kept on the shelf for a long time and lose their freshness due to long storage. The green tea can, if stored correctly, retain its freshness for several months. But it is very doubtful that it is optimally stored by the suppliers. Many tea shops and Internet service providers therefore do not provide any information at all on the Time of harvest. In such cases one must always take into account that the tea is already years old and no longer offers the aromatic experience and quality a fresh harvest.

In order to preserve the freshness of the tea as long as possible, it is essential to pay attention to storage. For smaller quantities, the tea can be stored in an airtight tin and should be used up as soon as possible. For larger quantities, it is advisable to portion the tea and store it in an airtight container in the refrigerator or freezer. For daily use, only a small amount should be kept outside. Green tea can be stored refrigerated for about 1 year without noticeable loss of freshness.

How to distinguish between a fresh and an old tea...

Both photos show infused Lung Ching teas from the 2004 spring picking, both teas have been stored for about 1 year. On the left: Well packed in the refrigerator, after infusion the green leaf colour is still very strong and fresh; right: At room temperature, the green colour has completely faded. The two teas taste accordingly.

In most tea plantations in China, tea plants are picked from March to October. A distinction is made between spring (until the end of May), summer (June and July) and autumn tea (from mid-July).

The mild temperature, sufficient rainfall and the resting period in the previous winter ensure that the tea plant produces strong shoots and supple leaves. The light conditions in spring particularly favour the accumulation of nitrogenous ingredients such as amino acids and vitamins, which are very beneficial to the taste of the tea. High quality green teas are therefore produced exclusively with spring plucking. A further advantage of spring tea is the reduced exposure to pesticides. Due to the mild temperature, there is hardly any pest infestation in the plantation, which makes the use of pesticides unnecessary.

The high temperature and strong light intensity increase the content of catechins and caffeine, which is why summer tea is stronger and tastes more bitter. For green tea, summer picking is therefore considered the worst.

After picking in spring and summer, the content of substances in the shoots and leaves is lowest in autumn. Accordingly, autumn tea does not taste as bitter as summer tea, but also not as aromatic as spring tea. Unlike green teas, some of the best oolongs are produced in the autumn.

As you usually do not have the opportunity to taste the tea on site in a tea shop, you must judge the quality of a tea solely on the appearance of the dry leaves. Important characteristics for the assessment are:
The look: High quality green teas consist mainly of fine buds and very young leaves. For example, one kilo of the highest quality Lung Ching is made from about 80000 buds. Hand-picked, of course. The buds of high quality teas often have very fine hairs. In some teas the hairs are so pronounced that one can almost speak of fluff.
As the quality decreases, the proportion of buds also decreases, but the proportion of large and older leaves increases. There is also an increasing number of broken leaves - a sign of the poorer production technique. A sure sign of poor quality tea is when there are even small branches and leaf stalks in it.
Colour: Due to the high proportion of buds and young leaves, which do not yet contain much leaf green, good green teas usually have a fresh, bright green, some even appear a little yellowish, such as the highest quality Lung Ching. 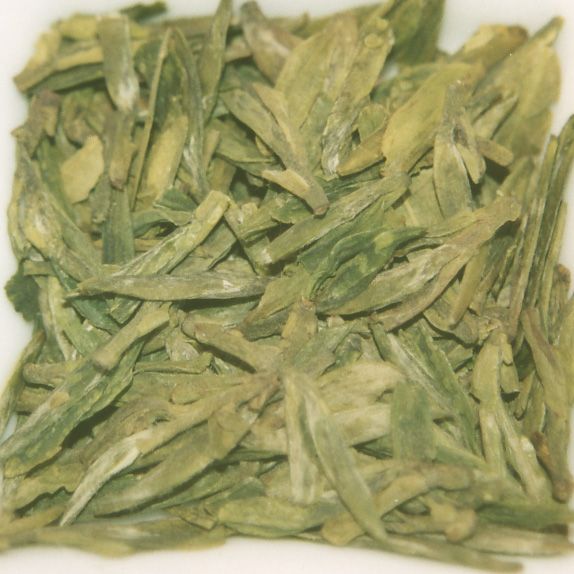 Lung Ching in high quality. 1. picking in spring, from the plantation on the lion summit (Shi Feng) in Hang Zhou. The tea consists exclusively of very young buds and leaves. Fine hairs are signs of spring plucking. Leaf colour is green, with a yellow hue typical of the Lion Peak Lung Ching. The buds are better visible after infusion, and the fresh green colour of the leaves is also clearly visible after infusion.
Green teas of poorer quality often have a dark brown to black colour. This colouring is mostly due to poor production technique. For example, if the temperature for deactivating the enzymes, the first and most important step in green tea production, is set too low, the enzymes are not completely deactivated. In the subsequent production steps, fermentation, which should be prevented in green tea, takes place and the tea leaves become darker. 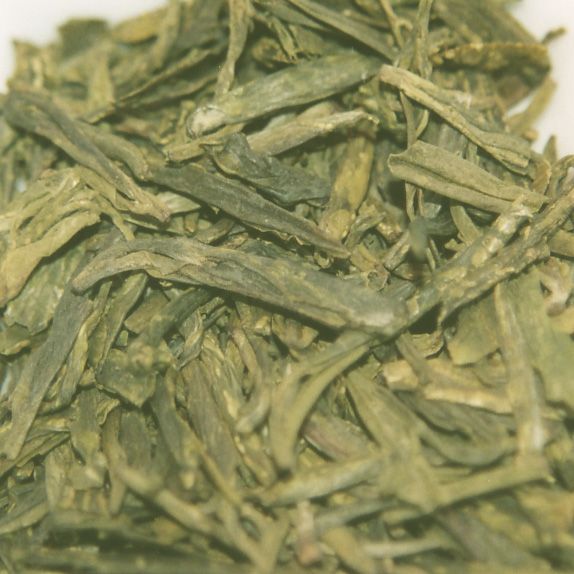 Example Long Jing low quality. Comes from Zhejiang province. Price in a German tea shop: €7,70 (2008). Picking season: not available in the shop. The tea consists mainly of leaves, occasionally buds can be found. Leaf colour is green, with strong black discolouration. After infusion, the leaves are mainly broken. 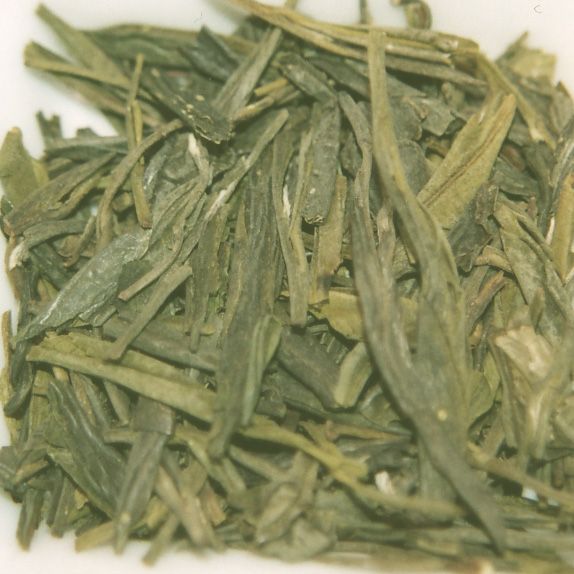 Another example of low quality: Lung Ching from Zhejiang province, organic farming. Price in a German tea shop: €8.50 (2008). Picking season: not available in the shop. The tea consists of long large leaves, leaf stalks or small branches can be seen with the naked eye. The leaves are very strongly discoloured black. The large leaves are even more visible after infusion.
Images - Gunpowder of different qualities: The increasing size of the tea balls with decreasing quality level can be seen very clearly 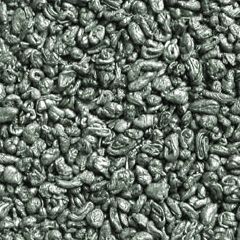 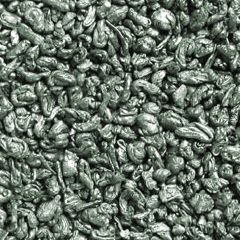 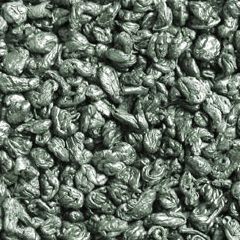 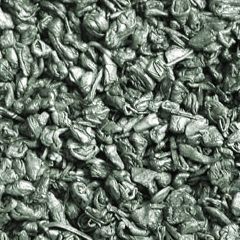 Gunpowder common grade
Scent: The development of the tea scent and its chemical composition is quite complex. In general, a roasted green tea has a stronger fragrance than an oven-dried green tea. This is also the reason why roasted green teas dominate in China. During the roasting process, the primary scent molecules, which primarily smell of fresh hay, evaporate. However, roasting produces a number of secondary scent molecules that make up the characteristic scent of a tea. Good green teas often have a sweetish, some even a roasted chestnut-like scent. Bad green teas smell either of nothing at all or of smoke or burnt matter.

The quality levels of teas 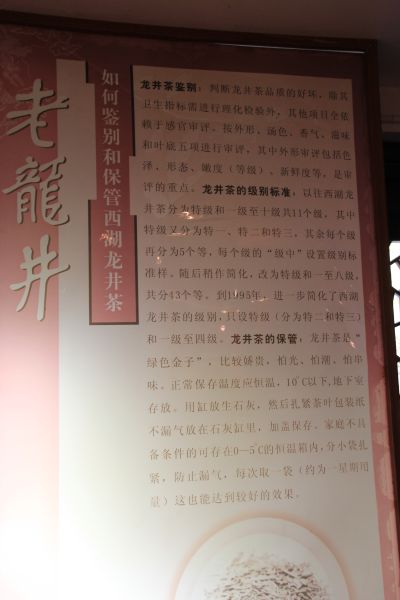 What does this mean for the purchase of tea:
An assessment of tea quality should always be based on the criteria mentioned above. Quality classes can often only be compared between producers in the region of origin. Long Jing , for example, comes from the village of the same name, Long Jing near Hangzhou and the surrounding mountains. Differentiation of the quality of the teas produced there is made according to the rules (see picture on the right). However, such classifications can only be relied upon if the tea is bought from a local and regional producer. Long Jing is produced for the mass market and, for export, often in other regions of China. It is therefore all the more important to be able to recognise the quality characteristics yourself. It must be remembered that the production price of tea increases exponentially with its quality. There are two main reasons for this:

< >
Compare Products
Compare
Clear All
You have no items to compare.